The Belfast Telegraph is the most popular daily newspaper in Belfast. There are two editions a compact morning edition (first produced in 2005) and an evening edition which has been printed since 1870, at which time it was called the Belfast Evening Telegraph.

The evening paper was originally a large broadsheet but in 2009 this was changed to the more popular compact style.The paper is owned by a large corporation the Independent News and Media Group which is based in Dublin and owns numerous print publications,radio stations and even websites!

Photo of the newspaper’s Belfast Offices: 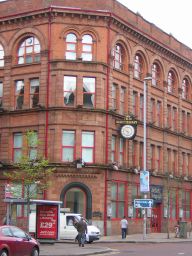 At one time the newspaper had a daily circulation of nearly 100,000 copies, but in line with global trends (mainly because of internet popularity growth) this has fallen to approx 70,000 daily copies. It is still however, the most widely read newspaper in Northern Ireland.
The central
Belfast Library

has many older editions of the newspaper in its archives.
Reduce Business Advertising Costs To Zero!

Newspapers throughout the world have been hit by a double whammy of loss of advertising revenue and decreased readership levels.This has arisen through the growth of internet popularity/access and the FREE or low cost advertising which this medium allows.

Many websites including this Belfast website, which attracts thousands of visitors every month (presently* 6000 and growing daily!), now offer the opportunity for completely FREE business advertising. *Apr2009

Unlike a newspaper, your online advertisment can be permanent and frequently updated at no cost (eg:running different seasonal offers or even daily offers!) and you can have alot more copy/information displayed for readers,compared to the regular newspaper display ad.

If you are interested in promoting your own business or service to our visitors and would like us to create a full page listing for you then please go to our Belfast Business Directory for further details.

My Story of the Belfast Telegraph

The Belfast Telegraph has been providing people in the city with the news for over 140 years.
Generations of families have turned to this newspaper to find out what is happening in the world around them. This paper didn’t appeal to everyone in the city but it no doubt played a huge part in people’s opinions about the world. It still remains the best selling newspaper in Northern Ireland.

In recent years the popularity of the internet has meant that newspapers have witnessed a fall in circulation and the Belfast Telegraph is no exception to this. There were about 100,000 people who were buying this newspaper a decade ago, but circulation has almost halved since then. It is hard to know what the future has in the story but there is no doubt that the Belfast
Telegraph has had an interesting past.

The first edition of the Telegraph was circulated on 1st September 1870. This first edition not only covered a lot of local news but also the Franco-Prussian war. From the early days the Telegraph was considered a Unionist newspaper and a lot of the coverage was influenced by this from the beginning. The paper was controlled by two brothers; William and George Baird. Over the years the newspaper reported on some of the most important
historical events of our time; everything from the sinking of the Titanic to the Easter Uprising in the Republic. Of course during the troubles the conflict would be reported daily; although there were many who would claim that these reports were biased.

The Telegraph remained available only as a broadsheet for a long time, but eventually in 2005 they relented and published a tabloid edition. They now print a number of different editions of the newspaper including; the morning edition, the city edition, the final edition, the country edition, and the Sunday Life. They once released a sports edition on Saturday evenings but this is no longer produced.

The Future of the Belfast Telegraph

Today the Belfast Telegraph continues to be the favourite newspaper for a lot of people in the city. Its editorial is considered to be moderate unionist and since the ending of the troubles
there has been a toning down of the rhetoric. The political landscape of Belfast has changed and the Telegraph has attempted to fit in with this. As we have already mentioned though it is the changes in how we receive our news that is the real problem for newspapers like the Belfast Telegraph. They do have an online version of the newspaper and this is quite popular.

We will have to wait and see what the future holds for the Belfast Telegraph. This is a worrying time to be a newspaper owner, but the hope is that the fall in sales in recent years will level out. There will always people who enjoy reading a newspaper and the electronic
media is unlikely to replace it completely.